Fire and Steel Vol 5: Out of the Smoke (Hardback)*

About Product:  In Volume 5 of the Fire and Steel saga, the Eckhardt and the Westland families move into one of the most turbulent times in history. Facing tectonic shifts like few generations have ever seen, they are caught up in a whirlwind that will permanently and profoundly alter their lives. Mired in the depths of a global economic depression, the world takes little notice of a 1930 Parliamentary election in the floundering democracy of Germany. But overnight, Hitler and his Nazi Party catapult from the smallest to the second-largest political party in the country. And he would not stop there. From the compulsory indoctrination of Germany’s youth to the persecution of Jews and the Nazi book burnings (which included Latter-day Saint classics such as Jesus the Christ), Hitler’s policies deeply affect the Eckhardt family, particularly Hans’s oldest daughter who must keep the real identity of her best friend a secret at all costs. For Hans, Hitler’s meteoric rise to power reveals a horrifying truth: Hitler has no intention of abiding by the rules of democracy he claims to espouse—his goal is total dictatorship, and it is now in his grasp. For the Westland family, the Great Depression brings hardships and sacrifices they never imagined. The fifth volume of Fire and Steel weaves together the story of two families on opposite sides of the world, each caught in a maelstrom of events that will test their faith to the very core.

About the Author: Gerald N. Lund received his B.A. and M.S. degrees in sociology from Brigham Young University. He served for thirty-five years in the Church Educational System, and he served as a member of the Second Quorum of the Seventy from 2002 to 2008. He is a prolific and bestselling author of both fiction and nonfiction and is best known for his historical novels, including The Work and the Glory series, Fire of the Covenant, The Kingdom and the Crown series, and The Undaunted. He and his late wife, Lynn, are the parents of seven children. 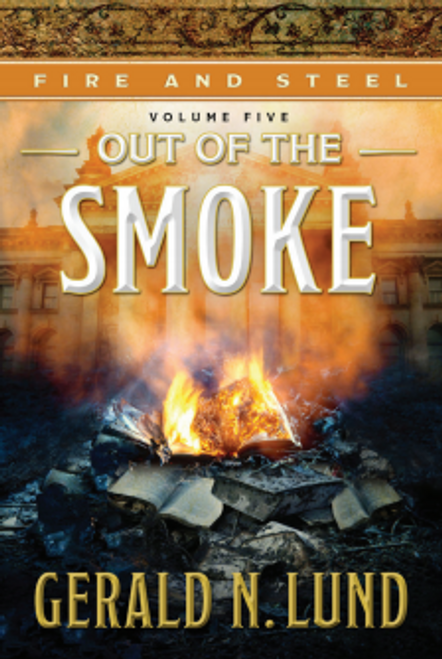 Fire and Steel Vol 5: Out of the Smoke (Hardback)*